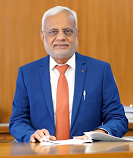 Dr. Hasmukh Adhia, a former officer of Indian Administrative Service, retired on 30th November 2018 as Union Finance Secretary & Revenue Secretary in Government of India. Apart from being Hon’ble Chancellor of Central University of Gujarat, Dr. Adhia is non-executive Chairman of Bank of Baroda and a member of Board of Governors of Indian Institute of Management, Bangalore. Dr. Hasmukh Adhia has got a basic Post-Graduate degree in Accountancy. He is a Gold medalist from Indian Institute of Management, Bangalore and holds a Ph.D. in Yoga from Swami Vivekanand Yoga University, Bangalore.