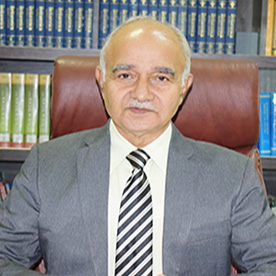 He possesses an excellent academic record with M.Sc. degree in Biochemistry from Banaras Hindu University in 1976 standing 1st in order of merit and Ph.D. degree in Biochemistry from Banaras Hindu University in 1980. Prof.Dubey has over 43 years of experience of research and 36 years’ experience of teaching. He has served as Head of the Department of Biochemistry at Banaras Hindu University for four terms, for more than 9 years. Prof. Dubey has published 157 scientific articles/book chapters in peer reviewed journals/books with more than 12,500 citations with h-index 46 and i10-index 100. Thirtyone students have received Ph.D. degree under his supervision. He has completed 7 major research projects funded by various extramural funding agencies. His research specialization is in Biochemistry with major emphasis on Stress Metabolism in Crop Plants, Bacterial Enterotoxins and Enzyme Technology. Prof. Dubey is recipient of several national and international awards in Plant Biochemistry and Biotechnology, which include Banaras Hindu University Medal in 1976, ISCA Young Scientist Award in Agricultural Sciences in 1982, Swedish Institute Fellowship in 1989, Japan Society for Promotion of Science Fellowships in 1998, 2005, INSA-German Academy of Science Exchange Programme Nominations in 1997, 2003, 2007; Top-10 Most Cited Author Award by Elsevier Publications for 2003-2008. Being nominated by Govt of India, MHRD, he served as Member on Academic Councils of Central University of Rajasthan and Central University of Himachal Pradesh as well as a Member on Court of North Eastern Hill University Shillong. He is presently serving as Member, Board of Governors of IISER Mohali, MHRD Council’s nominee for Selections at IISER Kolkata, Visitor’s Nominee at IIT Madras and IIT Guwahati. He has been serving as Chairman and Member of NAAC Peer Teams for many universities and colleges for many years. In a delegation of Vice Chancellors, sponsored by World Bank, he participated in Academic Leadership training at Pennsylvania State University, USA in 2014. He is Fellow of Indian Society of Agricultural Biochemists, Biotech Research Society of India and Bio-Ved Research Society of India. He has worked in several reputed laboratories abroad in countries like Sweden, Denmark, Japan, Germany and has given many invited talks and chaired scientific sessions in national and international conferences in India and abroad. As a life member of many professional scientific bodies, Prof. Dubey is serving as Member on Editorial Board of the Journal of Agronomy and Crop Science (Germany) and Indian Journal of Agricultural Biochemistry.. >>More